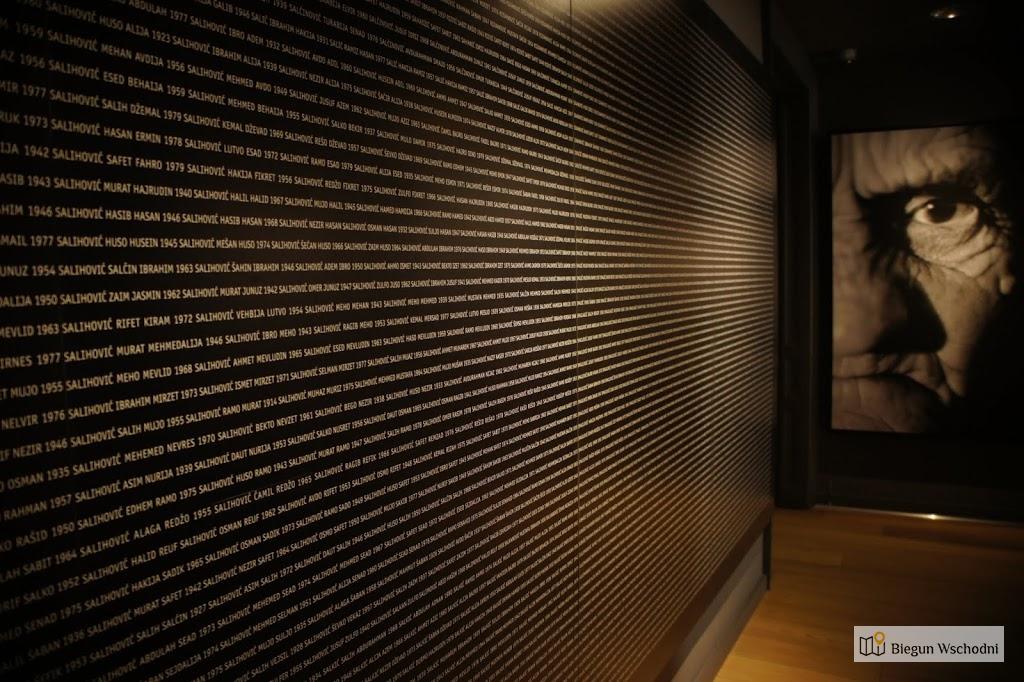 If I was to point at one place, which was the most memorable from our trip to Balkan states in September, it would most definitely be Sarajevo. In my eyes, it is a city soaked with war, pain and tragedy as deeply as deep is the memory and grief of the people who have survived a hell on earth. Sarajevo is not made from buildings, memorials and showplaces. Sarajevo is made from people. From human beings, who are condemned to memories…

In This War, There Were No Innocents

Travelling through Bosnia, it is hard not to ask several questions. If you see ruined households, scars from bullets on buildings and sidewalks, countless abandoned houses, why this war erupted are inevitable. The questions of ‘Why?’, ’What was the point?’, ‘Why so much hate?’ and ‘How it is possible that neighbor killed neighbor in such a brutal manner?’ cannot be answered. We should realize, that this war is an enigma for locals, let alone outsiders. The best we can do is to piece the truth together and try to sort out the course of action. Then we can realize what it was all about, and that it was a war with no oppressor and oppressed, no good and evil nations. In this conflict, it was a free-for-all. Serbs murdered Croats, Croats killed Serbs, Serbs slayed Bosnians, Bosnians slaughtered Croats and so on. The more inhuman the way of killing was, the more satisfying it was for the killers. Think about it when you pass an old man on Croatian, Bosnian or Serbian street. Think about women too, who were raped repeatedly throughout a single day. By a single man, or a whole group. Many of them is still alive and you can meet them anytime. How many of people that are now in their twenties are a fruit of such rapes? How many mothers have to deal with the memories of the unwanted conception every time they see their children? How many people have left, being unable to live in a place so heavily soaked with painful memories? Look at the empty flats, on abandoned houses in Sarajevo. Look at the houses, which still hold the scars of war. They will probably never see the day of their owners returning home. Seek out books and films made to the memory of the war – just to understand better. For example ‘Grbavica’, ‘In the Land of Blood and Honey’, ‘Circles’ or ‘For Those Who Can Tell No Tales’). After you have seen and understood them, then you can go to Sarajevo.

Everything had started with the union. Union which was conducted at a push, because it was connected with nations extremely different when it comes to culture, language and religion. A concept of one, united country – Yugoslavia – in the place of Serbia, Bosnia, Croatia, Montenegro, Macedonia and Slovenia was born in the beginning of 20th century. This was justified by the need to increase defensive capabilities against Austria and Hungary – because as we know, the bigger the better. But these nations are as different as Turks and Italians are. The most important difference is faith. Croats are Catholics, Bosnians are Muslims, and finally Serbs are mostly connected with Greek Orthodox Church. And with the difference in faith, comes cultural and mental ones.
When the ruthless dictator Josip Broz Tito was in charge, Yugoslavian economy was booming. The problem emerged after his death and grew within several years into a huge economic, political and national problem. Economy was crippled. The formerly suppressed antagonisms emerged and raised to a range of nationalism. Additionally Serbs (which were supported by Russia) wanted to seize control, and the rest didn’t want it happen. This initiated a wave of national liberation movements.

Slovenia and Croatia vs Serbia

The first ones to break away from Yugoslavia were – in June 1991 – Slovenia and Croatia (supported by Germany). These actions met with fierce opposition from Serbia. War erupted firstly in Slovenia, but ceased after several days, thanks to a huge input from civilian population. Serbian-Croatian fight was not completely over till the end of the year. Around 20 thousand people were killed in this strife. Yugoslavian nations were murdering themselves, including civilians, in the name of ethnic purge. In April 1992, Bosnia and Herzegovina declared independence, which caused an eruption of warfare in this area. Shortly afterwards Serbian army encircled Sarajevo, cutting the civilians off from water, electricity and food.

On the area of Bosnia and Herzegovina there was a war of everybody against everybody and genocide. It was an area very hard for any army to take over. It was due to the fact, that it was (and still is) populated by evenly mixed communities of Croats, Serbs and Bosnians, scattered across the land. None of them were in majority.
It was here, where the darkest side of war was the most apparent. A side full of hate and cruelty… and all of that in the name of beliefs and orientation. Many killed purely for fun. Snipers set up a contest – who will kill more people. The best one “drilled” one and a half thousand bodies in one, single day. There was a strange custom, involving violent slaughters. The more violent, the funnier they were for observers, and the more respected the killer was. Females were captured and raped…a dozen times a day, by a group of violators. Children were slaughtered before the very eyes of their parents…and the other way around. During our first visit to Sarajevo, we have seen a film made back then, in which one of young women talk, how Serbs broke into her home, put her three month old sister in an oven and cooked, before the eyes of the family. Similar things happened in Mostar, only Croats were doing it there, not Serbs.

During our visit in Sarajevo, we have tried to grasp what had happened in nineties and what is happening now. And we constantly had this feeling, that the city was dragging us through its most bleeding wounds. We entered the city from the western side. A main street, which led directly to the certre, was commonly called the Sniper Avenue. From 1992 to 1994, in the district north from there, Serbian snipers and artillery were placed. They were shooting anyone, who was trying to escape down. Neither gender nor age was of concern. The tracks of this are still visible. Inhabitants of Sarajevo were living and dying – surrounded by Serbs – for 20 months. Getting out of there was impossible. Civilians couldn’t comprehend what was happening. The three nations, that now are fighting so fiercely, formerly were living together peacefully. No one was interfering, nobody was threatened. Why everything switched around 180 degrees in such a short time? Why so much hatred to everything different? Why they had to escape? Many didn’t want to flee. They believed, that his war was a mistake, that somebody will come to his senses and make it stop. They were living “ordinarily” in besieged city.
Despite the lack of basic needs and the threat of constant shelling, they were organizing school for children (at least once a week), dancing classes, plays, etc. During this siege, there was even a Miss Sarajevo contest organized. Do you know the song by U2 and Luciano Pavarotti from 1995? And do you know how it was made? They were watched by the whole world…

If you have an opportunity, watch a documentary by Bill Carter called “Miss Sarajevo”, fragments of which were used in the following music video. From the group of children which we can see there only one made it out alive. It was Alma Catal, who played the leading role. As far as I know, she is still living in Sarajevo.

They are the most striking feature in there. Every crack of land, every lawn, field, and park were used to bury bodies. Bodies, which were more and more plentiful with every single day. No one could get out of the city. As time passed, next rows of graves were created. Just look at the dates on them to realize how fast this process was. One of the symbols of Sarajevo was an Olympic city set up in 1984. It was there, where first victims of the siege were buried.

The Roses of Sarajevo

In a place, where an artillery shell killed at least one person, cavities were filled with a red resin. It usually resembled a rose, hence the name. They are located all around the city, calling into mind all of the people who died there. Most of them are so destroyed, that are barely visible. Many are covered with new surface. But several dozen still remain and bring the horrible images to mind.

They were used as shooting spots for snipers. From the encompassing hills, killers had the centre of the city cleanly visible. We visited one of these hills. And so it happened, that we came across something which was probably a base for snipers. We made a bunch of pictures, but from far away. We were afraid to come closer, as mines are plentiful in Bosnia and Herzegovina. Immediatelly afterwards, we fled, feeling unease.

A Tunnel Under an Airport

It was 800 meters long and 1,5 meters high. It was built around the time of the siege, dig by the hands of civilians supported by Bosnian army 24 hours a day, seven days a week. It connected the centre of Sarajevo with a quarter not overtaken by Serbs and was used to provide food and water for people locked inside. Later it became a way of supplying weapons.
It is estimated, that around million people passed this tunnel. When Serbs found out that it existed, a unit of Bosnian army was dispatched to protect it. Its sole role was to guard the entrance and exit. Nowadays, you can see 20 meters of it. That is how much left.

When in Sarajevo, you have to see it. You can find out much more about the besiege, about a life in the city surrounded by savage killers, witness the “aid” of UNO and NATO, get to know the fate of countless innocents. You can see two movies in this exhibition – “Miss Sarajevo” made by Bill Carter mentioned before and “Srebrenica”.

It is a symbol of people, both civilian and military, who dies in the II World War. It is burning (nearly) non-stop from 1946. In 2011 a group of hoodlums doused it, but after nearly 20 seconds it was kindled by a passer-by tourist.

Flea markets or stalls with different stuff are very monotonous. Most of the stock consists of different sorts of objects from war. The choice is very vide. If you want to, you can bring a unique souvenir from Bosnia. But after seeing all of this, do you really want to?

Bright Side of Sarajevo

Reading our last post, which told the story of the war in Yugoslavia and its…