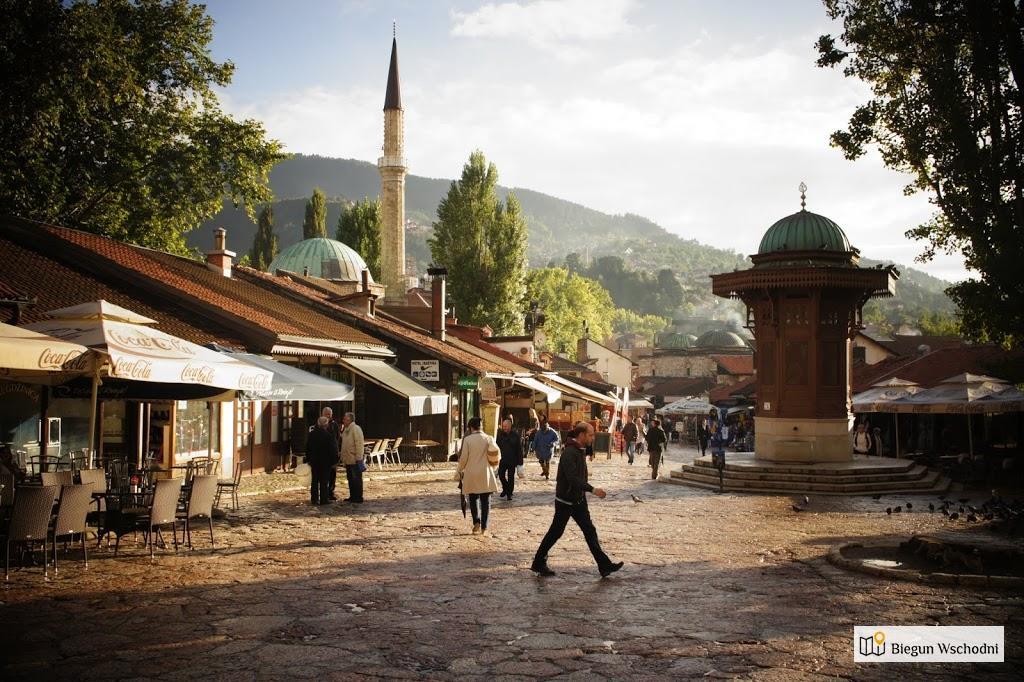 Reading our last post, which told the story of the war in Yugoslavia and its results, you could get the impression, that Sarajevo is depressing and sad. And the truth is quite opposite. It is filled with details, that are radiating positive energy. This city is neither pretty, nor monumental. As a capital city, it is very bland and meager, with nothing that can stand it apart from other cities in the region. But it has this special “spark”, something that grabs your attention and does not allow you to forget it. Anyone who stayed there for a day wants to go there again. Just like in Lviv.
We went to Sarajevo at the end of our trip to Balkan states. Two days earlier, we booked a room in Ville Hostel (thanks to booking.com site) located in the city center. We were the only guests back then. First thing that enchanted us there was the hotel service. Two young people working there were doing everything possible and then some to make our visit a pleasure. They told us how to get around Sarajevo, what should we see, where to eat, employing two maps and pictures. They also shared a fair amount of trivia along the way. Also, despite clear information (on the hostel’s website) that parking the car in a garage is additionally charged, people working there decided, that this will be on the house. Justification was simple – the garage was empty at the time and keeping the car outside was not the best idea. We cannot recommend this place enough!
Yep, but let’s get to the point.

6 places you should see in Sarajevo

It is usually on the first place in any guide. And for a good reason. Atmosphere of this place is unbelievable. The word Baščaršija literally means “main market”. This place was for years used primarily for trade. Nowadays it is also a social spot and tourist attraction. If you have a chance, visit it – it would be best to see it in different times of the day. In the morning – to visit one of many small cafes and order a traditional bosnian kahva boiled in turkish coffee pot. Take a look at people around. Nobody is rushing at this time of the day. Drinking coffee is a morning ritual there. You’ll notice different people around you – in different age and social status. You’ll notice businessmen, who drop by on their way to work, notice mother with children, oldies who smoke pipes, women dressed in hijab. You’ll also notice beggars, most usually with children. And they will notice you. They will approach and be insistent. After one of them lets it go, another one will pop up, and so on. They are full-time beggars and a constant element of the city. Sitting there, take a look on the rooftops. Only around 10% have survived the war. You’ll notice them right away. All the rest have new tiles. This can give an idea about destructions caused by warfare. Think about it and then savour the coffee brought by waiter. It has an unique taste which cannot be felt anywhere else. We encourage to buy an original coffee pot – and when you buy it, buy it in one of the alleyways of the main plaza – Kazandžiluk street. It is important to buy it there, because it offers only genuine, Sarajevian handcraft. In most other places, you will encounter souvenirs imported from China. After you get back home, you’re gonna miss this coffee. In the middle of the plaza, there is a wooden booth. This is a Sebilj well. A leftover from Ottoman times and one of the very first waterspouts in Europe. There used to be around 100 of them all around the city. You can drink water from one of many taps around the well. It is potable and tastes well. It is said, that whoever drank the water from this well, will never forget Sarajevo.

Just few steps away from place, where you would drink bosan kahva, there is a shopping strip set up in 1555. It is located below the level of the road, which serves the same purpose for centuries. Even if you do not wish to buy anything, it is worth taking a stroll via it’s main hallway. It’s selection pictures the cultural variety of the city perfectly.

From past experience, I know that carrying a large shawl can be a lifesaver. In Bosnia and Herzegovina it is especially useful. If a woman wants to enter a mosque, she must have legs and arms covered, and usually a head cover is required. That is why, even if it is a heat wave out there, it is good to be dressed in a long skirt (or long, airy trousers) and having a shawl at the ready. There are a dozen mosques in Sarajevo. I recommend visiting at least one. The closest one to a place with fresh coffee is XVI-century mosque called Baščaršijska džamija, which is famous for it’s great accoustics. The most handsome mosque is located a little bit farther. Gazi Husrev-bega (Begova džamija) building was built in 1530, and it is one of the most beautiful sacral buildings in Balkan states. In front of it, there is a grand šedrvan well, which could have been used for ritual ablutions, but it was never confirmed above all doubts. Next to the mosque, there are two structures located. They are mausoleums from XVI-century, called turbets. One of them was built for the founder of the mosque, Gazi Husrev-Beg.
The thing worth taking a look at, are peculiar muslim gravestones, located nearby. Based on the type of stone they are made of – and from rich ornamentation – it can be deduced that dignitaries were buried there.

If somebody loves regional beer like us do, it is a paradise on earth. It is a special place for multitude of reasons. The brewery was set up in 1864, and it was the first of its kind in Bosnia. The very first thing that inspire ave, is the inside of it – beautiful and stylish. The second – taste of the beer, and we tried all of them. The last, but not the least – smooth-jazz, played live.

The history of this place captivated me. It stretches as far, as XVI century, when in the place where it was placed, city authorities decided to buy a mosque. Owner of the house did not allow it to be bulldozed to the ground – he demanded it relocated. It was dismantled and, piece by piece, rebuilt on the other side of the river. This story happened again, after 200 years. It was located on a space, where authorities decided to built a town hall. Grandchild of the first owner demanded a second relocation. And this demand was granted too. Today the Spite House is situated near it’s original location, near the mosque, on the other side of Miljacki river. On the ground floor, a restaurant is located.

In february 1984, when we were not even planned yet, Winter Olympics were held in Sarajevo. 1273 competitors from 49 countries took part. Overall budget of the games was as high, as 160 million dollars. This would not raise an eyebrow – this type of feasts were always expensive – but of one fact. Yugoslavia was bogged down in a deep economic crisis. Inflation was at 50%, and foreign debt at 20 bilion US dollars. Despite all of that, 214 thousand dollars came to organisers’ account. All of that came from cash raised by citizens of Sarajevo. Very handsome! And the best part is – the whole investment was finished way before the deadline.
The biggest venture was stadium of Kosevo rebuilding, and the second biggest – building a bobsled track from scratch on one of the hills around Sarajevo. It was the place we wanted to see – we were curious how does it look at the moment. There we came across a sniper base we mentioned in earlier post.

Sarajevo has many surprises and many secrets to uncover. We both want to get back and spend more time there

If I was to point at one place, which was the most memorable from our…